Many people protesting the death of George Floyd are seen carrying banners "Black Lives Matter." However, the bitter truth about America is that only rich people's lives matter. Similarly, some people are seen carrying posters "I Can't Breathe." Again, the ugly reality of America is that only the rich can breathe freely in America. Racism and discrimination of the deprived segments of society are an integral part of the American system. 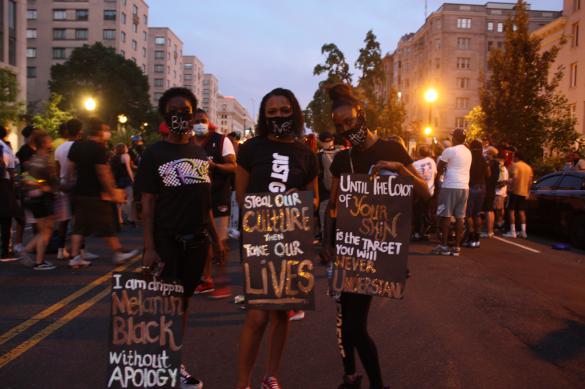 The American system was founded on the pillars of racism, exploitation and discrimination. The native Americans were the first victims. They were robbed of their lands, hunted like animals and their population was wiped out through treachery as when they were given blankets contaminated with small pox virus and buffalo, the animal that they were dependent upon, was hunted to near extinction in order to cause starvation. The next victims were the Blacks. They were captured like animals from Africa, shipped like cargo to America and auctioned like livestock. Super exploitation of these slaves laid the foundation of American prosperity. America annexed a huge chunk of Mexico and exploited the cheap labor of Mexicans and other Latinos to work in the farms and orchards. The Chinese labor was exploited to build the railroad and suffered one of the worst oppression and humiliation. The poor white immigrants were used to fight the wars of expansion and aggression.

Even though all minorities and poor faced discrimination, the Blacks have suffered the worst. Slavery was abolished with adoption of the 13th amendment in 1865. However, the Vagrancy Law of 1866 authorized local law enforcement officials and overseers of the poor to arrest, detain, hire out to work, or expel anybody who had no obvious means to support, refused to work at wages normally paid in the locality, or went begging. Obviously, slavery was practiced without calling it slavery. At the end of the Civil War, the US government promised every former slave 40 acres and a mule; to this day this promise has not been kept.

The Vagrancy Act remained law in Virginia until 1904. Jim Crow laws were state and local laws that enforced racial segregation in the south. These were enacted in the late 19th and early 20th centuries to disenfranchise and deprive the Blacks of the political and economic gains made by them in the Reconstruction period. These laws were overruled by the Civil Rights act of 1964 and the Voting Rights act of 1965. However, leaders like Malcolm X did not believe in the civil rights movement and advocated militant struggle against the American State. He was assassinated in 1965. In 1966, the Black Panther Party came into existence. It was a revolutionary Marxist party that saw racism in America as a structured and institutionalized part of capitalism and advocated that the struggle against racism should be integrated with the struggle against capitalism and imperialism. However, most of the leaders eventually became part of the establishment and the party was dissolved in 1982.

The anti-war movement in the seventies led to the emergence of a new political awareness which transcended the old racial and even class barriers. As opposed to the mostly Black and the poor, many middle class white young people were attracted to this movement. However, in the eighties, many of these people lost their revolutionary flavor and tilted towards Neo-liberalism and Neo-conservatism. Just like the leadership of the Black Panthers, many of these became part of the establishment.

With the growing polarization of the American society and the growing gap between the haves and have-nots, as well as with the deepening crisis of capitalism and decline of American influence globally, new social and political equations have emerged. On one side, there are white supremacists and extreme rightists. On the other side are leftists, ultra-leftists and anarchists. Antifa is a left-wing, anti-fascist, political activist movement that is playing a prominent role in the protests which are taking place after the death of George Floyd, which is being called a murder by police of an unarmed Black person.

America has destabilized and disintegrated many countries. However, this time the whole world is watching, many in disbelief, the ugly realities of American society: Racism, anarchy and violence. These violent protests have dwarfed the violent protests in Hong Kong that the western media was so fond of showing.

Although this is not the first time an unarmed Black person has been killed by the police, yet the protests this time are very different. In the past, it used to be mostly a Black versus White affair.  However, this time many diverse forces have joined the protests. In some places, even the police and parts of establishment have joined the protests. There is dissent at the highest levels, particularly to the idea that the US Army should be called to deal with the protestors. This poses a very serious challenge for the establishment. This raises the possibility of a fundamental change in the American system. Maybe the Blacks and all other people besides the rich and the powerful will also matter and they all can breathe.